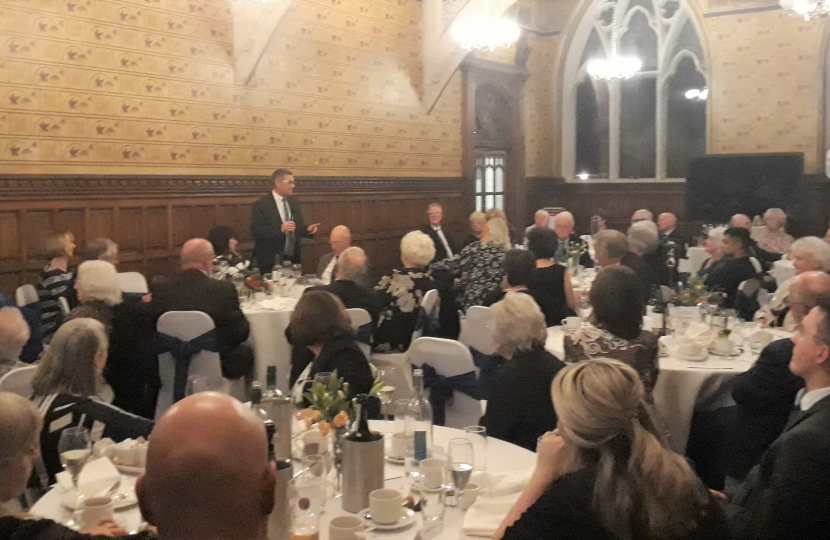 Members of the Conservative Party from both Heywood and Middleton and Rochdale constituencies attended the Town Hall on Saturday (26th October) for the association's annual dinner.  This was the first time that the event had been held at Rochdale Town Hall and following a drinks reception in the grand setting of the main lobby, members were then seated in one of the ornate halls.  The new venue proved very popular with attendees commenting positively on the setting.

Councillor Patrica Sullivan led proceedings thanking elected members past Mayors, special guests and most importantly our many supporters for their attendance a greeting was also made by our Association President Councillor James Gartside.

Dinner was served before Councillor Ashley Dearnley introduced the evenings guest speaker, Craig Whittaker MP for Calder Valley.  Craig spoke passionately and very informatively about his time in the whips office including positions as Lord Commissioner of the Treasury and Vice-Chamberlain of the Household.  Members commented on how interesting and enlightening Craig was and that he gave a real insight into a little-understood office which was steeped in tradition.

Following his speech, Craig took members from the floor including the obvious ones around the potential for a forthcoming election.  It was reassuring to hear this experienced MP speaking of the importance of local campaigning and his belief that the values of Conservatism are where members should be placing their focus.

Craig then helped to draw the raffle and bring the evening to a close.

All funds raised will be used towards local campaigning.

Boris Johnson: We will meet our obligations to Hong Kong, not walk away

Britain wants nothing more than for Hong Kong to succeed under “one country, two systems”. I hope that China wants the same. Let us work together to make it so.