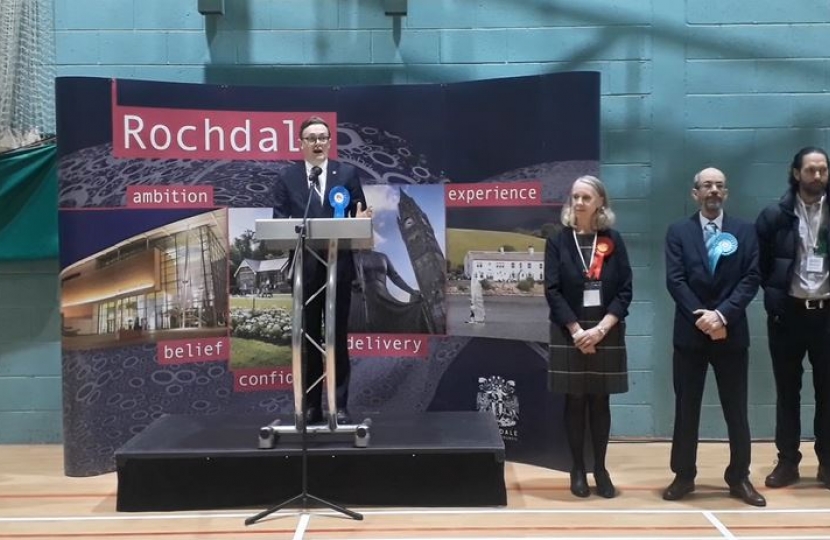 Conservatives across the borough were celebrating this morning as Christopher Clarkson was elected as the first ever Conservative MP for Heywood and Middleton.  Chris secured the historic win with 20,453 votes,  a majority of 663 and 43% of the cast votes.

Labour's Liz McInnes, who had been the MP since 2014, received 19,790 votes, a massive reduction from her majority of 7,617 just two years ago and a result which cost Labour the constituency which they have considered a 'safe seat' since it was created in 1983.

Speaking after the declaration Chris said:  "I would like to begin by thanking the Returning Officer and count staff for the excellent way in which this count has been conducted, we are very lucky to live in a democracy where we have a free, fair and efficient count.  I would also like to thank the police for their role in keeping us safe and maintaining the way that we do these things in this country.

"I don't intend to speak at length because I think that everyone has had a very long day.  Suffice to say I am looking forward to going down to London to get Brexit done so that we can crack on with the priorities in this area"

His comments on Brexit were met with boos and jeers from members of the Labour group who shouted that this wasn't about Brexit.  Chris replied to the hecklers simply saying: "you lost, deal with it."

Chris continued: "But, more importantly, I'd like to thank the people who have helped me get here, these things don't happen in isolation.  I have a fantastic team who have stood alongside me, not behind me every step of the way, not just this time but also in 2017.  There are far too many people to thank individually but I will over the next few days, but it would be entirely remiss of me not to say thank you to my agent, Peter Winkler who has made this happen, thank you Peter."

"Thank you to everyone who voted for me, and if you didn't you will still have my absolute best. Thank you. Good night."

Boris Johnson: We will meet our obligations to Hong Kong, not walk away

Britain wants nothing more than for Hong Kong to succeed under “one country, two systems”. I hope that China wants the same. Let us work together to make it so.